The next Cowbit Parish Council meeting will be on Monday 17th January 2022, at 7.30pm in the village hall

Cowbit - pronounced Cubbitt or Cub-it - is in South Lincolnshire and now situated within the local government area of South Holland District Council. To the west of the village lies Cowbit Wash, now low lying fen farmland but once a wet marshy area which frequently flooded when the River Welland overflowed, allowing fen skating championships to take place in the winter. Since the 1950s a relief channel for the Welland in Spalding has stopped all this, and Cowbit Wash is now a flood plain in name only. Spalding is approximately four miles to the north, and Crowland is about five miles south. A road that’s thought to be Roman in origin, and one of a number running from the east coast to the main north-south running Ermine Street, runs through the village.

The name Cowbit is from old English and means Cow Enclosure. In ancient times swans were bred in the locality, and there was a court known as the Swan Mark, though it’s unclear exactly what its function and powers were.

The Anglican parish church, dedicated to St Mary, stands in a prominent position on what was, until 2010, the main A1073 road through the village. The oldest part is 13th century, but the church was much enlarged and re-consecrated in 1486/7 when the chancel and Perpendicular tower were added. Extensive restoration work was carried out in 1882. The church has some parish registers dating back to 1561. There was at one time also a Wesleyan Methodist chapel in the village, but this has now disappeared. There is also a Grade II listed early 19th century windmill on the eastern side of the village.

In 1842 the chief landowners were a Maurice Johnson and J. R, Carter, but the Gedney, Dyson, Childers and Guy families also owned some property.

Like most villages hereabouts, the main industry has always been agriculture, with the fertile fen soil producing excellent crops; the area has been described as ‘the larder of England’ as food from here has always been sold over a wide area, including the London markets. 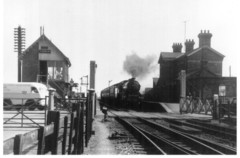 The railway reached Cowbit in 1867 when the March to Spalding line opened, with a station complex on a site that was then slightly to the east of the village. The line was originally part of the Great Northern Railway, but from 1882 it became part of the Great Northern and Great Eastern Joint Railway running between Doncaster and Cambridge. The line’s main purpose of which was to bring coal from the pits around Doncaster into East Anglia, Cambridgeshire and Essex. For Cowbit though, the railway also provided a quick, convenient and cost-effective route out (both north and south) for locally-grown produce. Extensive freight-handling facilities were provided including a large goods shed, and at one time the railway complex employed 14 people from a stationmaster down. There was even a small railway hotel behind the station. Passenger usage was never great - not surprising really considering that between 1831 and 1911 Cowbit’s population never exceeded 664, and after WW2 most outgoing freight switched to road transport. Cowbit station closed in 1961 (three years before the infamous Beeching Report) but the line through the village remained open until November 1982, and there was a ‘throuigh’ passenger service until the end. Since closure the trackbed has been built on north and south, but all buildings from the station complex survive, and the main station building has recently been refurbished.

COWBIT, a village and a parish in Spalding district, Lincoln. The village stands near the Welland navigation and the March and Spalding railway, 3½ miles SSE of Spalding, and 5 NNE of Crowland; and has a post office under Spalding, and a r. station. The parish includes also Peakhill hamlet, and allotments in Pinchbeck North Fen. Acres, 4, 590. Real property, £4, 591. Pop., 649. Houses, 141. The living is a vicarage in the diocese of Lincoln. Value, £625.* Patrons, Feoffees. The church was built in 1486; and has a tower with a groined roof, and an octagonal panelled font. There is a Weslenan chapel. A school has £55 from endowment: and other charities £30.

Since 1897 - the year of Queen Victoria’s Diamond Jubilee - the village has marked every Coronation and Royal Jubilee with a traditional fenland punt gun salute across Cowbit Wash. These have taken place at the same time as the gun salutes in London and the last such was in June 2012 to mark Queen Elizabeth IIs Diamond Jubilee.

Cowbit has expanded considerably in recent years and now has a population of around 1000. Most of the expansion has been on the eastern side, and many residents now commute to Peterborough - or even London in some cases - but the village retains a rural character and has an extremely strong sense of community. In 2010 a new bypass road was opened to the east of the village, taking most traffic away from the village and also making it possible o reach Peterborough in around 20-25 minutes.